These exceptional contemporary African artists reach within their hearts to create art that expresses introspection and cultural heritage. 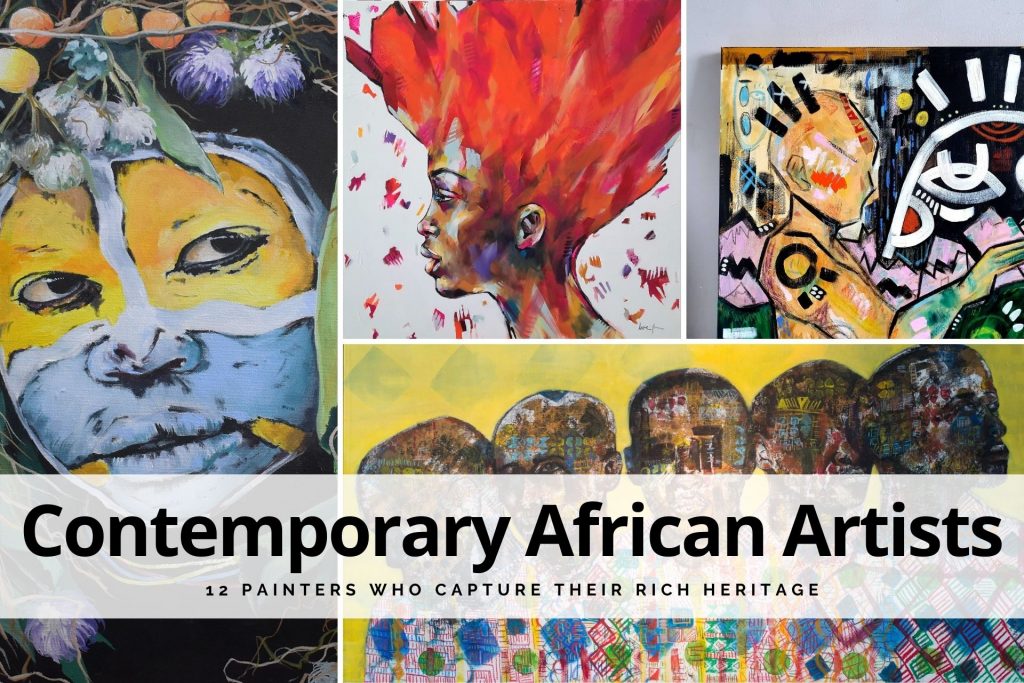 If you’re in search of culturally diverse art that will take you on a journey of stories untold, look no further.

Abu Mwenye is an African artist whose artistic journey began in his native country, Tanzania. As a young child, Abu was influenced by the artistry that coursed through his family. His mother, Rita, possessed artistic talents that captivated Abu’s attention, while his uncle’s skill in art often fascinated him, enough to be distracted from school work. Supported and encouraged by his family, Abu began to study and create art. Much of his work features kanga patterns, Masai warriors, chungu (pots), and shanga (beads). Abu says, “This is not where my interests end. I am also a commission artist who has painted outdoor murals in my area and I also make portraits for those interested.”

Charmaine Chanakira describes her art as a quirky mixture of manga and her Zimbabwean heritage. Her inspiration comes from listening to bands like Lady Blacksmith Mambazo and Oliver Mtukudzi as the sound of the mbira returns her consciousness to the motherland. Growing up in London left her feeling disconnected from her roots and she began to seek ways to reconnect with her ancestry. In these moments of self-reflection, she discovered in her art. As a self-professed spiritual hippy, Charmaine believes that art unlocks different aspects of ourselves that we cannot see in our conscious life. She says, “Every time I paint, I feel like I’m getting to meet a new part of me and that is what makes my art unique.”

Nadir Babayev was born in 1985 in Baku in a family of artists. He spent major parts of his childhood among creative people, visiting plenty of exhibitions, seeing how canvases find their significance. He is a professional boxer who paints pictures that makes his story and art unique. And he has since created a lot of works in different styles, including surrealism, abstraction, fantasy, impressionism, and abstract surrealism. Gradually, he became involved in penciling, wall graffiti, painting on glass, ultraviolet and phosphor painting, including artworks on leather.

Buhle Nkalashe is a painter who incorporates mixed media like oil pastels and oil acrylic paints in her artworks. With her art, she celebrates South African people and their cultural heritage. And she appreciates this beauty through her own interpretation of traditional patterns borrowed from isiXhosa, isiZulu, and Ndebele. “I feel these patterns and color are a strong symbol of the South African ethnicity,” she says. Furthermore, Buhle has been exposed to traditional clothes through many cultural events and ceremonies in her Xhosa culture, hence she feels inspired to reimage these patterns together in a contemporary African setting, to create a new hybrid of South Africa.

Kirsten Todd was born and bred in Lancashire, England. Growing up with her uncle who was an artist and her biggest mentor plunged her into the world of arts at a very young age. Kirsten specializes in portraits and abstracts with an expressionist style and works mainly in acrylics, and she has shown her work in various exhibitions around the UK while winning a couple of emerging artist awards. Painting and creating art for Kirsten makes her feel liberated, mimicking the feeling of entering an altered state of reality. It is as if she flows with the divine as the piece of work develops before the creation is born. Currently, her main collection of paintings concentrate on the Divine Feminine, highlighting the strong spirit and strength women possess; and the fight to make their voices heard.

Somi Nwandu expresses her self-consciousness through her art. Another purpose of her artistry is to educate others to cultivate a culture of empathy, regarding the difficult mental challenges we face and endure. In her most recent collection, ‘Her Space”, she explores the waves, as a phenomenon and metaphor of African femininity. The pieces layer emotion, craft, sound, and motion to focus on three areas. These include mental stabilization advancements, the utilization of an African woman’s femininity to personalize Afrofuturism, and electromagnetism as a metaphor. Her works show her facial features interwoven with patterns that reflect her powerful heritage and African culture representing a significant slice of her being.

Diogenis Papadopoulos was born on the 20th of November 1985. He discovered his artistry when he was about 9 years old. Since then, he has explored several styles, including working with acrylic, making collages with fabric or magazines, and working in ink pen. Among the three, Dio loves to work with ink pen, using mathematical symbols, equations, lines, shapes, etc, to accentuate his subjects. His works can be found around the world in several homes of wonderful people, particularly in the USA.

Kornelia Weingarten is a German artist juggling life between Europe and Africa. Spending decades living across several parts of Africa has had a strong visual and emotional impact on her art. Liberia, Togo, Benin, Gambia, Ethiopia, Rwanda, and now Sierra Leone became not just home but also sources of inspiration to Kornelia. “I’m surrounded by a riot of colors, the patterns of fabrics, the vibrating atmosphere of the markets, and the beauty of nature – a strong influence on my artwork,” she says. Recently, her focus has been on portraits. Most of them do not represent the specific image of someone but the blend of her experiences and impressions. Also, she works on commissions, where capturing the personality supersedes reproducing a photographic likeness. Kornelia says, “I aim to capture the ‘essence’ of a person, to look beyond the obvious.” Her paintings can be found in many private collections globally.

Stephen Aifegha was born in the western part of Nigeria called Lagos, often known as the New York of Nigeria. His artistry is influenced by his identity and culture as an African raised in Nigeria; however, he prefers to identify as an African than a Nigerian. Furthermore, Stephen is a mixed media artist who uses original African fabrics and newsprint as major elements in his art. African fabrics are used as a representation of his identity and connection to his African heritage. The newsprint, on the other hand, is used to make social commentary regarding issues related to justice and freedom for the black race. Statements like “black lives matter”, a dominant political statement that was cut out from a newspaper.

Frantisek Florian started painting very young. In the very beginning, he was influenced mainly by Picasso, then later, African arts. Although, His biggest inspiration in the world of African art was his African friend who he met at a football club. Since that encounter, he has been incorporating African motives into his artwork, and till today, elements of African culture reflects in his paintings. His desire to spread joy propels his gravitation towards African arts due to their color vibrance and vivid expressions.

Lioda Conrad made the decision to study arts when a collector paid her for a small abstract painting. This event set the precedence for her journey into arts which took 2 years before she was confident enough in her craft. Some of her abstracts have since been featured on magazine covers, with the promise of a brilliant future ahead. Her multi-disciplinary style and medium work include contemporary portraits in split contemporary colors and charcoal, fumage portraits both realistic and emotionally expressive.

Tania Sacrato started painting at the age of 5. Later on, her professors started to notice her artistry, then they recommended an art school. This never came to fruition since her parents’ choices led her down another path. As she matured further, she developed her arts with paintings and papyri for friends and family. Now, her art has become a significant part of her existence. She says, “Art has given me the strength to look inside and to tackle the difficulties of life with my head held high. When I paint, emotions flow as clear as water from a torrent. I am tears, I am joy, I am anger, I am despair, I am peace.”

The beauty of African art lies in its layered stories, rich history, and vibrant colors. These are all 12 contemporary African artists we covered in this article: