These contemporary landscape artists explore the elements of nature to reveal its calming essence. 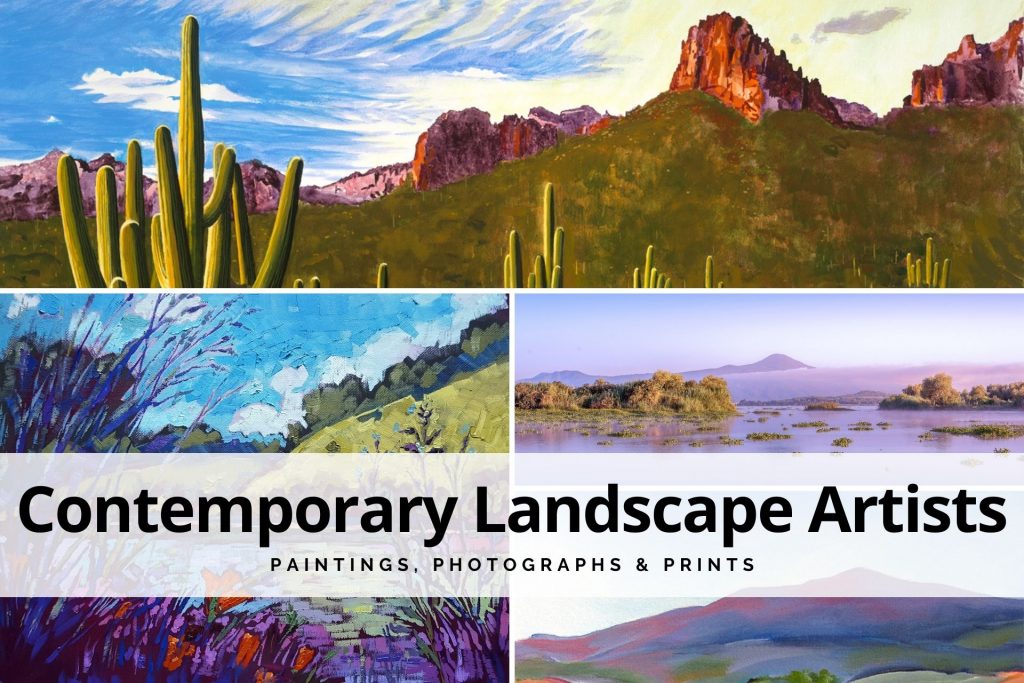 We have selected 21 stunning contemporary landscape artists that have succeeded in bridging the gap between reality and art. Each painting feels like getting caught in nature’s impeccable and unrivaled beauty. The sheer serenity, the burst of minty joy accompanied by a rush of admiration.

If you’re inspired by nature’s divinity and calming qualities, these following artists will sweep you off your feet then plunge you into the world of absolute tranquility.

Adam Bogusz is one of the few contemporary landscape artists who draws inspiration from his imagination. He suspects the distinction in his artistic process stems from his experience as an only child who spent a considerable amount of time creating pictures from his imagination to entertain himself. “I’ve never felt the desire to explain the meanings behind my paintings,” Adam says. He enjoys the ambiguity attached to his paintings as he believes it allows his viewers to create their own stories.

David Crosby is a British artist whose work has always been inspired by his environment. Born and raised in London, he later relocated to middle England where he enjoyed the artistry attached to the beautiful Georgian stone town filled with artistic minds. As a landscape photographer, David explores the calm deep fjords of Western Norway and the soaring majesty of the mountains, finding himself lost in awe amid capturing these exquisite works of nature. Lately, he creates art while listening to the cries of seagulls in a southwestern Devon seaside town.

Lynne Douglas is a creative landscape photographer born in Glasgow. For several years, Lynne explored art simultaneously alongside her career as a research scientist spending her spare time traveling the Scottish countryside with her camera. Though the scientific side of her artistry embraced mastering the technical aspect of photography, her love for abstract painting urged her to ignore the rules. She began experimenting with the realms of art by using her camera as a brushstroke, moving it during shots to create a blur and a sense of movement. By ignoring the rules, she discovered she could bring her dreams to life, merging hills and the sky with the land below and depicting movement in waves as they hit the shore.

Natalia Baykalova is a Russian contemporary landscape artist. Skiing through the snowy mountains of Siberia, Natalia began drawing sketches and taking photographs that expressed her mesmerizing connection with nature. The whispers escaping the mountains, the ethereal ambiance created by the sun illuminating the paths, all expressed with swaths of lulling colors. She tries to convey the emotions that accompany interacting with nature by mimicking reality in her paintings.

Sara Roberts is an Australian painter. She sees painting as a passage that unites polarities that bridge the gap between her various experiences. Having spent time away from Australia experiencing different countries, she began to question her identity and how it relates to her art by using her paintings to explore and harmonize her multiplicities.

Zohar Flax is an Israeli-born painter. Using her experiences living abroad, particularly in Japan and the UK, where she spent over 25 years, Zohar blended her old and new memories as they relate to the places she has experienced. Though her art resonates more with the memories from her childhood landscapes, she embraces the alienated feeling that accompanied living abroad.

Aleksandr Korol is an outstanding Ukrainian modern artist.  He graduated from Kharkiv State Academy of Design and Arts/Department where he learned the traditional academic manner of Plein-air realism. Alexander works in an impressionistic, realistic manner of painting with elements of symbolism, due to its expressive qualities. He also enjoys traveling and painting outdoors, while studying the cultural uniqueness, and historical features of his travel destinations. His artistic style is a skillful combination of realism and abstraction, using textures, volumes, and semi-volumes.

Francisco Palomares is a Mexican-American artist. His artistic journey started as a child from visiting classical art museums with his mother to reading art-related books. Though he developed an interest in art as a child, he was unable to study art properly due to financial restraints until his sophomore year in high school. Today, Francisco has a bachelor’s degree in fine arts from California State University. His artistry highlights the luminescence of the black and brown skin as a reflection of the community he grew up in. Also present in his art are documentations of landmarks that are on the brink of oblivion due to gentrification.

Marina Kaverinskih made the most out of the pandemic that threw the world into an eerie standstill. She used this moment to visit the beautiful Moraine Lake and mountains where she engulfed herself in its captivating capsule to draw inspiration for her “wonders of the world” art collection.

Olga Ibadullyaeva is a Ukrainian artist. Her path towards artistry formed through her mother’s involvement in her interest in arts. Today, she believes there are no ordinary moments in life hence her obsession with giving relevance to the mundane and casting spotlight on the obscure.

Shandor Alexander is a Ukrainian Plein-air landscape artist. He draws inspiration from working al fresco, gathering energy from the open air, and enjoying the artistic freedom and tranquility it brings. In his words, the essence of Plein air painting is in the transfer of colors, mood, the flickering of light, and the vibrations of the atmosphere. His favorite artistic destinations are the Transcarpathian Carpathians and the Tissa River, where he visits often.

Bhavna Misra draws inspiration from diverse corners of landscape, wildlife, portraiture, and everyday objects. She believes the purpose of creation is to introduce disruption to add value, amid experimenting for the sole purpose of growth and making a difference. Major elements and styles that are consistent with her paintings are trees, skies, bold brushwork, and contrast color play.

Justinas Krasuckas is a Lithuanian realism painter who explores landscape art. He’s one of several contemporary landscape artists that finds comfort in painting in an outdoor setting. He draws inspiration from the wild mysteriousness of nature hence his preference for painting en Plein air.

Mercedes Gordo‘s art is a mix of styles ranging from classic to modern. Gordo’s paintings are inspired by her curiosity, passion, and ultimately her desire to learn. She intends to unleash a sense of emotions for the viewers through colors, textures, and designs that contain untold stories.

Rob Van Hoek is a Dutch artist who has been painting professionally since 1993. He has been inspired by the landscape for years, particularly the countryside, which he cites as his greatest source of inspiration. Naturally, he is drawn to the patterns, rhythm, surfaces, colors, and lines of trees along the road or that of a lonely tree in a field. He often uses a bird’s eye view as opposed to a linear perspective when creating his painting to alter the sense of details.

Tomas Castaño is a landscape artist who enjoys capturing the light and multiple colors present in the sky according to each moment of the day. He mentions the sunset as a huge inspiration, which he emphasized in his series named “SKIES”. His most recognized works are his urban landscapes, particularly the facades of commercial establishments from the 19th and 20th centuries which are still preserved in old Madrid to get the new generations accustomed to the places where their ancestors developed their activities.

Christopher William Adach is a Polish photographer living in Mexico. As a follower of Davinci’s philosophy, he finds solace in simplifying things, seeking the shortest ways to convey ideas. He strongly believes that the true character of things lies in the smallest details, hence he avoids involving multiple elements in his works. Despite being a photographer who spent a lot of time around music clubs and arenas as an artistic entrepreneur, his inspiration is tied to the divine perfection of nature. He says, “In nature, there are always the little sparks which start the fire like contrast, forms of light.”

Kerry Milligan is a landscape painter who enjoys the creative freedom of experimenting with color, form, and line variations observed in nature. Through her paintings, Kerry intends to express the beauty and calming effects that nature brings into our lives. Her creations range from abstract dreamscapes to detailed scenery emphasizing forms of nature through using bands of color, curvy lines, and organic forms dissolving into one another. “I’m inspired by colorful landforms against the blue sky, wine country fields, and the rolling hills in mountain range valleys,” Kerry explains.

Michael Stoyanov was born in a small village in Bulgaria where he grew up listening to the bleating of sheep and the sounds of the hammer hitting the anvil, as his father worked on barrels for homemade wine. His journey into becoming one of the most successful contemporary landscape artists in the US started with a degree in art from college at the age of 21. He moved to the US in his early 40’s where he’s since enjoyed recognition for his artistic merits including a citizenship award. There, particularly in Arizona, he cemented a connection with the nature surrounding him where he draws most inspiration for his painting.

Santiago Vanegas is a Philadephia-born artist who has also spent much of his time living in Columbia. Navigating through two different cultures has played a role in his artistic inspiration. For several years, he moved back and forth between the United States and Columbia before finally settling in Columbia for 14 years. Today, he’s back in the US, precisely Atlanta, where he lives with his family. He has explored several styles of photography including surrealism, mixed media, street photography, and landscape among others, hence his preference to be recognized as an Autobiographical photography artist. This affords him the freedom to explore whatever he finds inspiring without being restricted to a defined genre.

Virginia Garcia Costa is an Argentinian artist based in Switzerland. She produces wall sculptures and paintings inspired by elements of nature. The impeccable manner in which she arranges her materials to imitate the surface of water makes her paintings truly unique. The different perspectives give a peaceful sense of harmony and modern aesthetics. Observing her art with a side glance, the perpendicular lines give the piece a calm and fresh sense of three-dimensionality.

Landscapes are a classical choice for any room. The beauty of landscapes is that they can be so diverse — from the types of terrain and geography to the styles (impressionistic, Plein Aire, abstract, realistic, and so on).

Here are all 21 contemporary up-and-coming landscape artists we covered in this article: