Contemporary sculptor Ralph Paquin starts with concepts of the “human condition” then moves dramatically toward anthropomorphically reduced forms and shapes. 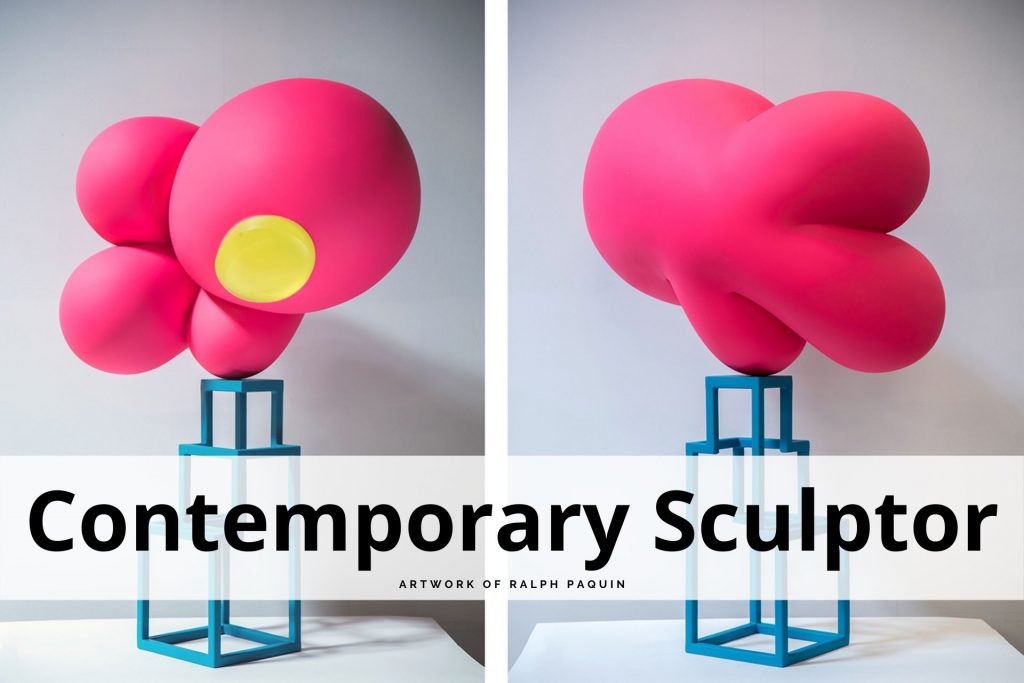 Ralph Paquin is an American-born contemporary sculptor. He received an MFA in ceramics from Cranbrook Academy of the Arts, where he studied under world-renowned ceramicist Jun Kaneko. After Cranbrook, Paquin shifted into large-scale artworks conceptually based on the “human condition”. He has held large-scale installations at a number of venues including MIT, MediaLab, and Artist’s Space Gallery in NYC.

Over the past 10 years, Paquin has been researching new media and processes. His sculpture and works on paper moved dramatically toward anthropomorphically reduced forms and shapes. Paquin’s current series entitled “Genes & Chromosomes” is a meaningful play on genetics and includes organomorphic shapes made into essentialist forms.

Journey to Becoming a Contemporary Sculptor

A year or so after getting hooked on art, Ralph moved from RI to CA. The school system in San Diego had a reward system for kids who were gifted in the arts. He was always involved with those programs. “I remember how wonderful it was walking around Balboa Park on World Culture Day and being influenced by so many art forms and styles from around the world,” he recalls.

The allure of sculpture

In college, Ralph had a strong interest in painting and drawing at the University of Massachusetts in Dartmouth. Later, he was attracted to sculpture and attended graduate school to pursue mastering the art form of ceramic sculpture. Since then, he has worked in other genres including performance installations, moving images, kinetics, lighting, and sound.

After making art for nearly fifty years, he has settled into making sculptures using a mixture of both traditional and more advanced cold casting materials.

From contemporary sculptor to expressionist painter

In the studio, Paquin usually has anywhere from 8 sculptures and up to 20 drawings/paintings in progress. Some are directly related; others chart new directions. “My interests are wide-ranging but are centered by the un-apparent physical or spiritual connections that “all things” have to each other- especially the human body,” he says. “Of course, these interests can work in the opposite direction of thought as well. In general, art-making for me is a mental, physical, and spiritual endeavor that can be difficult to manage but is nonetheless satisfying…. sometimes euphoric. As an artist, it takes a long time to see one’s creative path. I am now able to say that my work references a broad range of personal ideology and interests in art. Philosophy, cosmology, scientific discoveries, and human personal ideology and interests in art.”

Be original, be meaningful, and be honest

Paquin tells his art students that creating art is not for the weak-hearted. “It is a much more intellectual endeavor than most realize and it is hard work to bring thought-provoking ideas and forms into the physical realm. It is work that cannot be done by itself and for now, it is more meaningful for it not to be a virtual experience. Be original, be meaningful, and be as honest with your artwork as you can be. Keep your hands busy and dirty.  Momentum is key, try to focus on the ‘next one’, the development of a worthy idea.”