Ezra Bejar’s inspiration for his expressionist paintings is guided by his transformation after a temporary loss of vision and 30 years of scientific discovery.

Artistic creations should not be restricted to just one side of the brain; there can be fluidity and conversation.

Ezra Bejar is a professional painter from Mexico City, educated in both the arts and the sciences. For over thirty years, he conducted original research and led a variety of science projects in a variety of academia, non-profit, and corporate organizations. He currently lives in San Diego, California, and has traveled extensively around the world.  He received a doctorate in Pharmacology (Medicinal Chemistry) from University of the Pacific in Stockton. 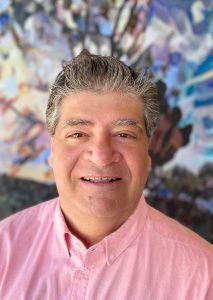 “In October 2010, after a temporary loss of vision, my circumstances changed my perspective and interests,” he says. “This change catapulted me to focus on my painting.” His first exhibition, RetinART: a makeover of my visual field, was held in 2014 in Fullerton, California. Since then he has participated in over thirty solo and collective exhibitions in the US and internationally.

“I have been privileged to be impacted by the work of many mentors and role models throughout my life,” Ezra recalls. “Starting with my father, an abstract painter, an entrepreneur, who exposed me to a variety of visual imagery and art development and promotion. By indirectly sharing his artistic network, I met people like Alberto Misrachi, Diego Rivera’s and Frida’s gallerist, at his Central de Publicaciones S.A. in Juarez Avenue. Misrachi worked with Pita Amor to promote Mexican art in Mexico and worldwide.

Expressionism and its influences

Learning from the best

After a hiatus of over a decade, Ezra reconnected to art through his second mentor at the University of the Pacific, Dr. Marvin H. Malone, a renowned pharmacologist and editor. He was also a very talented painter and engraver. Ezra learned a great deal about science and art through their many conversations. Dr. Malone constantly reminded Ezra to “work every day on it, even though it does not seem you are making any progress.”

Ezra’s scientific profession landed him in San Diego. His wife soon introduced him to Cleveland painter, Marion Godlewski. He shared pearls of wisdom about art appreciation and creating art inspired by nature. He encouraged Ezra to paint a wall with him, even though he was 80 years old. Marion began painting in 1942, while in the Armed Forces. He studied at the Cleveland Institute of Art and was the recipient of many art awards. One of his paintings is in the permanent collection of The Butler Institute of American Art. Marion was a prolific painter, who painted every day for over 60 years creating hundreds of pieces.

Recently, two colleagues at the SDSU School of Art and Design — Mark Siprut, digital and multimedia artist, and Colombian-born Carlos Castro Arias, a multidisciplinary artist — redirected Ezra’s artistic pursuits. He spent two years in advanced studies with them. “Carlos’s influence has been crucial to dissolve mental compartmentalization and reconnect with my scientific past,” Ezra says.

Ezra is currently working on The Bright and Dark series. Altogether over 70 paintings created by blending traditional physical (drawing and painting) techniques with modern digital methods. These pieces emerge from his current interpretation of our changing reality, by blending science, art, and humanity.

“My art reflects continuously on my transformative journey and understanding of the world,” he says. “I rely on an ethical, deeply rooted, uncompromising, artistic vision. Keeping an eye on color, balance, textures, and a central idea. I am always dancing in a fluid interphase where multiple elements and media coalesce.”

This series explores a variety of themes that include changes in society due to the SARS-CoV-2 pandemic, and the relationship of man with nature, and ecology.

“My pursuit is to contribute to the idea that art and science are closely connected,” Ezra says. “Artistic creations should not be restricted to just one side of the brain; there can be fluidity and conversation.” The use of new, powerful digital techniques can also propel imagination. He wants to leave a mark in the art world with innovative works that communicate the evolution of painting; changing the interpretation of the world and the relationship humans have with their surroundings.

“I hope people look at my story and contributions, which will lead them to embark on their own journey in spite of adversity.”

Ezra was recognized as a binational artist by the Mexican Government Ministry of Foreign Affairs (IME) and received a travel award to participate in an annual, multidisciplinary art exhibition sponsored by the government. His hope is to continue to work with IME to open opportunities for Mexican artists living abroad.

He has also been elected as a board member of the International Association of Art (IAA). The IAA was constituted and formalized by UNESCO in 1954. Artists like Joan Miró, Georges Braque, Alexander Calder, and other important figures left their marks at this organization, an association with charters in over sixty international countries. Ezra’s US charter (IAA USA) is in Los Angeles. He is working with US colleagues and art organizations around the world to create opportunities for IAA/USA members to network and expand their global horizons.