“I try to be fast and spontaneous when I’m painting,” says expressionist portrait painter Mario Henrique. 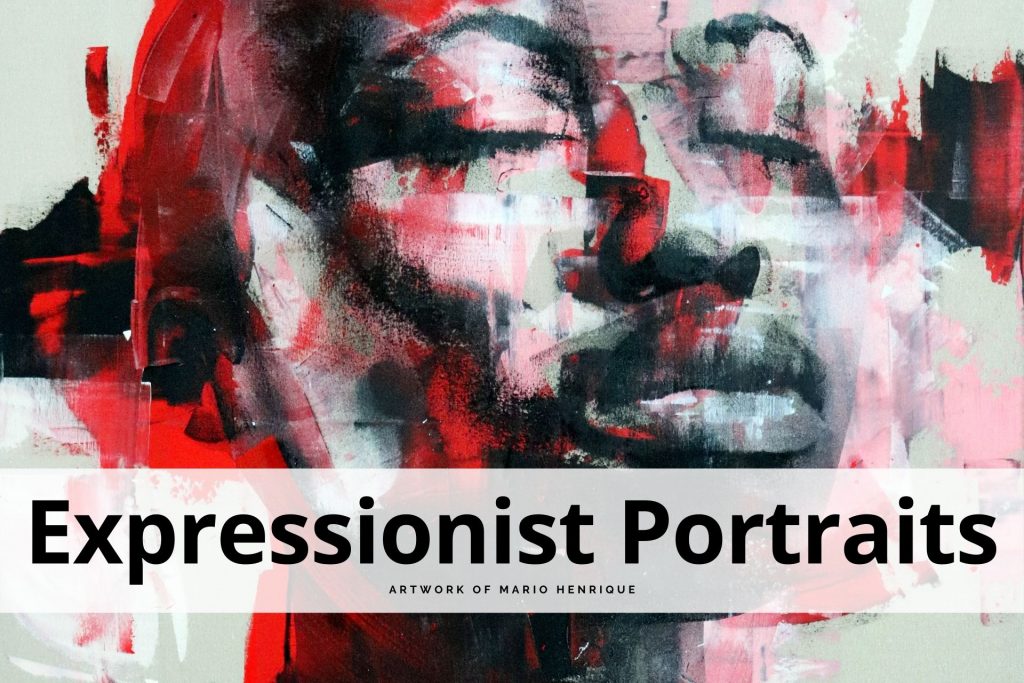 Mario Henrique is a contemporary painter of expressionist portraits. He graduated in Design from Lisbon’s University of Fine Arts and later worked as a creative director for digital projects for almost a decade until his company was bought by one of the largest online groups in the world.

Henrique likes working with uncommon and “rough” materials, like cardboards, reversed canvases, and hardware tools. His approach to painting is incredibly abrupt and spontaneous. He relies on drippings, splashes, and paint throwings. The observer should be able to infer the physicality of the painting process by looking at his brush strokes and paint drippings.

Expressionist Portraits That Transcend Predictability
This post may contain affiliate links, which means we’ll receive a commission if you purchase through our link, at no extra cost to you. Full disclosure here.

Shifting between distinct realities and cultures

Growing up in Portugal, Mario was fortunate enough to be able to travel and easily move between different European countries and experience distinct realities and cultures. His family always encouraged him to do so, which had a large influence on his artistic vision. “I was exposed to museums, art galleries, and exhibitions at a young age, and that was certainly a fundamental influence in my upbringing and visual culture.”

I’ve always been interested in art, even as child.

Moving on from his childhood, Mario took painting lessons on the side during his college years. The artist who taught him had a very traditional, “old-school” approach to oil painting. “Although my current work is basically a deconstruction of those strict rules and methods,” he recounts, “that certainly helped me understand the foundations of a good painting.”

The bizarre madness of jumping between different expressionist portraits

With Mario’s special, abrupt style, he’s always working on several different paintings at the same time. “Yesterday I was putting on the finishing touches in a painting from my Somnium Series,” he says, “and today I decided to revisit some pop portraits, so I started a couple of new pieces around that theme.” He’s also working towards an exhibition at ArtCatto, a renowned Portuguese gallery based in Algarve. And he’s sketching large-scale pieces to ship to Bill Lowe Gallery – they have represented his work in the southern US for some years now.

Mario’s approach to painting is based on chance, on small random accidents. “When I throw paint, I can do it with some premeditation,” he says, “but I can never really predict where the paint will actually fall on the canvas.” His style doesn’t rely exclusively on his persistence or his technique. “That’s why I don’t feel completely responsible for my paintings – in the sense that, although I can answer for my initial intentions, the final result is always something that I could never anticipate and something that’s out of my absolute control.”

The act of painting is a product of awareness

People often ask Mario about his inspiration. What inspired a particular painting? What is his motivation? His answer has been: “To be honest, I always thought that inspiration is overrated – I try not to rely too much on it.”
“It’s more important to be self-aware and mindful of your surroundings. You can draw inspiration from almost anything – a movie that you saw, music that’s playing in the background, some old photos you revisit on your phone… Painting cannot depend on motivation. It is more important to be aware and in the right place, at the right time. The act of laying paint on a canvas is just a mere consequence of this awareness.”