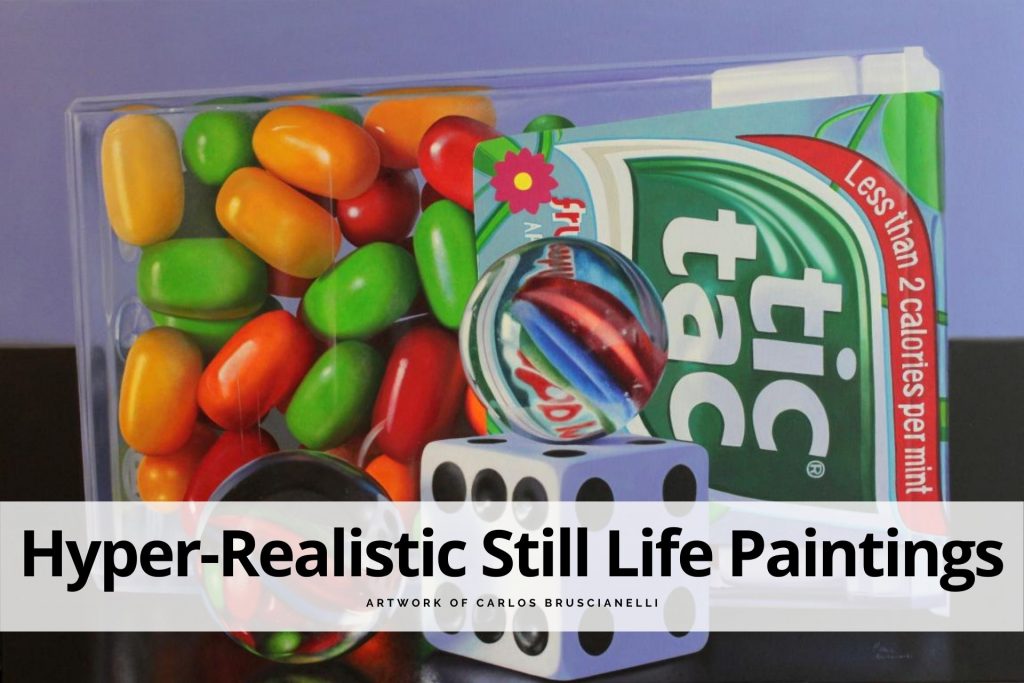 Carlos Bruscianelli, hyperrealist painter born in Caracas, Venezuela in 1980. He originally studied to become a civil engineer, but the art world kept calling him. In 2004, Carlos began taking classes in realistic painting at the Tesarri-Rizzo Museum. He learned hyperrealism techniques using oil on canvas and soft pastels.

By 2008, he was exhibiting his work at the prestigious Dimaca Gallery and then the LPG Gallery in his hometown. His work now is shown all over the world, including shows in Miami, New York, Tawain, Spain, and Italy.

A certain ease to paint

“I was born with a certain ease to paint and with certain difficulties for everything else,” Carlos says, “therefore, it was a simple decision, dedicate myself to what I like to do and make a living from it.”

Seventeen years ago he began his career as an artist, but as is often the case (at least with realistic artists) he also had a knack for drawing. He sold drawings to his friends at school. “I drew what I saw on television, but I never imagined that this would be my work, that my artworks would be exhibited or acquired in countries that I had never visited,” he says.

When he was a teenager, Carlos ventured into the world of tattooing. “The results were not the best,” he says. “I felt that I had to learn to draw correctly, but at that time I did not have the opportunity to take classes and I didn´t know where to do it. I finally got better with practice but obviously, I wasn’t satisfied. It was in 2004, when for the first time I formally took painting classes, that year my artistic career began.”

A move from Venezuela to Miami

In 2016 Carlos decided to move to Miami, Florida. Gallery owners such as Roy Saper, Ana Moreno, and Dana Salvo gave him their support and trusted in his work, which was fundamental to establish himself in the United States. “I will be eternally grateful to these people and to all those who gave me their support,” he says.

Carlos mentions Luis Royo, Frank Farzetta, Boris Vallejo, and HR Giger as some of the artists who inspired him at the beginning of his career. Then he became interested in the work of hyper-realistic artists or contemporary realist artists. “I have met some of these painters,” Carlos says. “I have exhibited at art fairs and art salons with some of them, something I never imagined would happen.”

Carlos’s work is set to evolve

“I recently had a meeting with a very important gallery,” Carlos says. “After exchanging many ideas, I decided that it was appropriate to change some characteristics of my work, use new substrates and use new materials. The result will be a different line of work for this year (2021) based on the traditional approach to classic still lifes, but with modern elements, strong colors and contrasts, and highly detailed.

“It is very likely that you will observe many differences between my current work and my future works.”

The secret of painting

Many people ask Carlos “What is the secret of painting?” The only advice he gives is: “Don’t settle; compete with yourself; don’t sacrifice the quality of your work to paint quickly; have your own style; don’t paint anything just for money; study, research, and learn from true professionals; respect your teachers; try to improve every day.”

Even an immigrant can achieve success

When asked about what kind of legacy he’d like to leave behind, Carlos said, “It is a quite complex question. In another stage of my life I would simply talk about the personal goals that I would like to achieve. But, as a Venezuelan immigrant, and as a Latin American, I would like to help eliminate prejudices and be able to show that even an immigrant, not yet being on an equal footing, can achieve success and contribute to the culture and economy of the new country where you reside.

“I want to show that we are productive and that we can do any job with the highest possible quality. I would like to be remembered as someone who achieved his goals despite his circumstances and inspires others.”

Is NFT Art Worth Anything Or Is It Just A Bubble?