Add some personality to your space with these large wall art ideas! 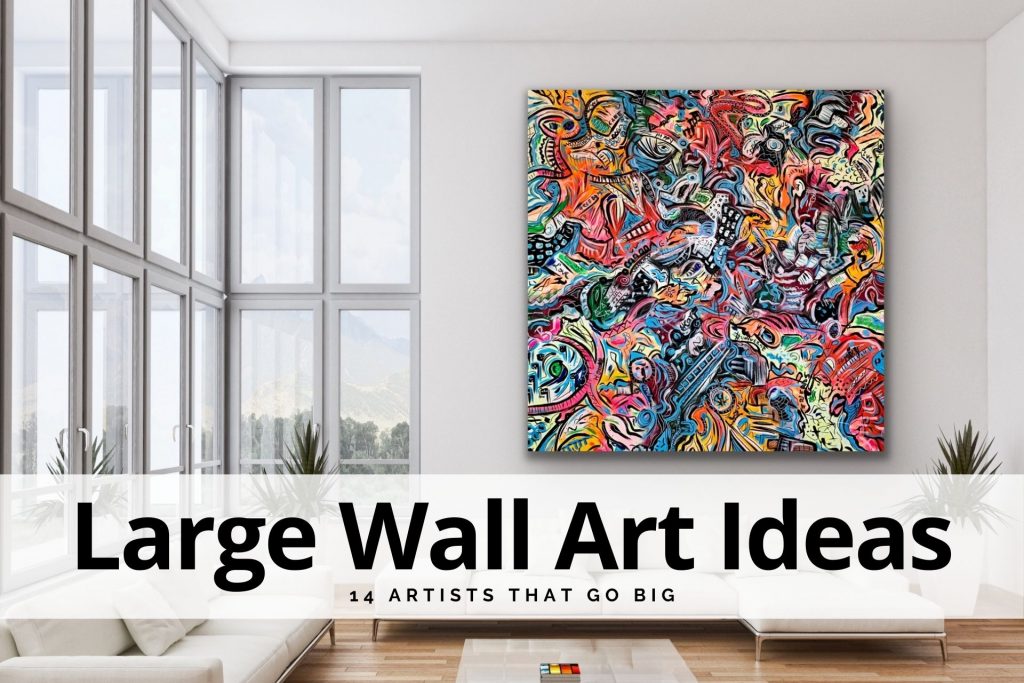 Large Wall Art Ideas to Transform Your House Into a Home

Adam Collier Noel is an American trained photographer and mixed media artist who defines himself as a “collector of relics.” His artistic approach is all about appropriating materials of nature, history, and physical form and reimagining a new narrative for them. That way, Adam breathes new life into everything he chances upon through his unique artistic interpretation. In doing so, he makes use of found images and reclaimed paper ephemera along with cyanotypes, image transfer, and other grand photographic processes. This style of Adam makes for a great collection of large wall art ideas you can pick and choose from!

Anita Kaufmann is a contemporary German painter who had lived on a sailing yacht with her husband and two kids for several years. They went across 28 countries, braving storms and waves and trans-Atlantic passages. Sometimes, they would go for weeks with no land in sight. Other times, they would visit vibrant places like Sydney, Panama City, and New York. They also spent one and a half years in French-Polynesia and got familiar with the Polynesian culture: Don’t rush, take your time, live the moment. During their years on the sea, Anita got inspired by the different cultures and people she met. As a result, her work changed from abstract art to human faces. Because she’s more of an introvert, Anita loves to paint large sizes.  “So at least my work is demanding the viewer’s attention,” she says.

Arun Prem is an established self-taught American painter who grew up in New Delhi, India. He found endless inspiration in the traditions, riotous colors, and fascinating mythology of the Indian subcontinent and began painting representational Indian themes when he moved to a new place, New York City. In hindsight, painting served as therapy for Arun’s increasing nostalgia and acute loneliness at the time. After he moved to southern California, he decided to make painting into something of a second profession and it took years to make his first sale.  Arun enjoys spending all his spare time in his studio.  “I love painting with oils,” he says. “India is still on my mind when I paint, but the style and expression are more universal.  “August gathering” is an example of this blended sensibility.”

Dalit Marom is a modern Israeli artist who has her own painting technique (or, unique ‘art language’) that’s based on colorful patches using a painters-knife. Her love for painting on large canvases makes her artworks legitimate large wall art ideas. When she was 40 years old, Dalit decided to quit her job as a lawyer and follow her heart to connect with the world of art and creativity. Dalit adores seeing her work evolve and flow naturally as each patch and each color leads to another, spontaneously. And that’s because her art is connected to her personality. The joy and colorfulness of her positive and optimistic attitude towards life reflect in her large wall art paintings. “I strive to empower the environment, as well as myself,” she says. “In my paintings, I always wish to convey an atmosphere of joy, positive energies, laughter, freedom and spontaneity.”

Igor Vasiliadis is a Russian fashion and art photographer whose camera took Angelina Jolie, Rihanna, Mike Tyson and many more. Igor loves using 19th-century authentic wet plate collodion technology the most, which is proven by centuries of practice and long exposures. This technology allows the model’s soul to break out from the momentary world of emotions and appear in all of its multifaceted beauty. Dark tonality, artifacts of drying emulsion, and all the mystics brought by silver and cyanides create the world of mystery. As a result, Igor’s works are a series of mystical, meditative portraits and artistic nudes. “Pure sculptural beauty of women frozen with long exposures and arise to antique esthetics,” he says.

Kris Gebhardt is an American mixed-media painter whose efforts are gritty — both literally and figuratively. Gray and layered, his subjects are centrally placed over a finessed background. Early on Kris would engineer what was available in order to create, thus forming his style. The beat-up surface is home to a beat-down subject with a distressed frame. Used cardboard, worn and tattered tarps stapled to one-by-fours, boxes, and dismantled furniture are just a few of the starting points for a Kris Gebhardt “paintumentary.” Each one the story of an actual person, the archetype of a being or Kris himself. His inspiration comes from the Greatest Generation, friends, employers and his own pre-artistic career. Gebhardt is proficient at portraying Every Man and his struggles.

Krisztián Tejfel is a Hungarian abstract and figurative painter who’s been painting and drawing all his life. “There was no other choice!” he says. Krisztian tried many different techniques that constantly shaped each other and had a big impact on what he does today. His work as a photographer proved to be a good basis for his figural paintings that are deep internal reflections aimed at developing himself. Since experiments don’t work well in all cases, they need to be constantly shaped and polished to make the result acceptable. So Krisztian’s paintings are characterized by chaos and serenity, perfection and anomaly, balance and uncertainty, construction, and destruction. For him, contradictions are important, as they are life.

Magdalena Antrobus is a British visual artist who chose painting as a way of self-expression. As she processes her experiences mainly via emotions, moods, and feelings – Magdalena found out that creating images was both the quickest and the truest way to communicate with the world. “As long as I am using words,” she says, “I am never really there. And so I started painting.” Magdalena paints out of joy, happiness, excitement, euphoria, and enjoyment. Temporary but very intense states of mind and body. She also prefers acrylics over oil paints because they’re more suitable to depict these quick, ephemeral, intensive emotional states. The colors mirror the dynamics of excitement and suggest the concentrated essence of fragmented mental experience.

Marina Venediktova is a Russian astrologer turned artist who loves to observe changes in nature. She has always felt the irreversibility of the past moment and wants to stop it. So Marina tries to show through her large wall art ideas the invisible or inconspicuous, the fragile that quickly disappears. She graduated from the Academy of Astrology in St. Petersburg. and was accompanied by scientists, astronomers, and philosophers all 5 years of her studies. They shared their deep knowledge about the Universe, its laws, and its connection with man. This opened Marina’s eyes to a new vision of life and the desire to draw it for those who do not have the opportunity to study it through books. “I paint pictures, I always think to please someone’s heart and give him a moment of warmth.”

Peter Nottrott is an experienced abstract German painter who’s built up an international base of collectors over three decades of an art career. The different color combinations, the different forms and compositions, all into one, extra-large painting, sometimes up to 10 sqm all reflect his love of art to the viewer. For Peter, the essential creative freedom is to be in his beloved atmospheric studio, with brushes and paints ready, a large white canvas in front of him, and him being completely immersed in a trance-like state and painting while listening to meditative music. This type of freedom makes it possible for Peter to incorporate as much dynamic strength and positive energy as possible into his painting.

Rufus Krieger is a digital graphic artist from Cologne, Germany. During his first artistic endeavors, Rufus drew and illustrated realistically. Later on, he was able to tinker with his abstract painting style where realism is broken, slaughtered and dismembered, then put back together again. He then finally settled for digital art, which combines both styles and where the answer—the rational, is destroyed as a new puzzle arises. Because in Rufus’s digital art, the mind is in bits and bytes. As soon as the picture becomes physical on canvas, or on aluminum and acrylic sheets, the mind not only continues to exist in bits and bytes, but also in a real body. This concept of his is based on the philosophical mind-body dualism view that mental phenomena are not physical.

Tatiana Hutsul is a contemporary artist from Ukraine. The main idea of her paintings is to convey harmony between her as an artist and art by itself; to create a certain harmonious combination of lines and color blurs. As a result, Tatiana sits in her studio all day long, embarking upon an imaginary world outside while conveying her inner being on a large canvas. And the painting shown below is the perfect embodiment of this creative process. At first glance, the posture of the young female with blue eyes resembles a modern model from the glossy magazines who does not allow the viewer to pass by indifferently and looks directly at them. The young piercing gaze is incredibly beautiful and attractive. It seems like a secret is hidden deep inside her eyes.

Tony Belobradjic is an Australian full-time figurative artist born and raised in Croatia where he studied Architecture and Engineering. His art career spanning decades kick-started when he first began exhibiting in the late seventies and later had his first solo show in 1983 in Croatia. After relocating to Sydney, Australia in 1989, Tony continued his art practice as a freelance artist. Today, he divides his time between his studios in Sydney and Croatia and exhibits both in Australia and Europe regularly. His style of painting is contemporary and impressionistic and is all about analyzing the complexity of human flesh. In hindsight, his creative process consists of painting directly onto canvas or paper, often without preliminary studies. His creativity also has a strong foundation and inspiration in works by F. Hals and Rembrandt.

Veronica Vilsan is a self-taught artist from Romania who’s inspired by the Universe and its wonder and nature and the spiritual/magical world within it. Being in harmony with herself allows Veronica to listen to her soul. According to her, that’s where true art comes from and it’s a vast and infinite field of creativity and love in all its expressions. As a result, she’s always trying to create something beautiful. Something that the viewer can live with long-term and be calmed or stimulated by. Something they can look at repeatedly and discover new things within. Couldn’t her work be any more perfect for large wall art ideas?

Any artist that made their way into this list of large wall art ideas will bring your walls joy, in a very BIG way.

Here are all 14 large-scale artists we covered in this article: