Argentinian artist, Guido Mauas, let light and shadow speak for themselves in his gorgeous oil paintings of women.

Guido Mauas’s work focuses mainly on the human form. Letting light and shadow speak for themselves, each painting is for him a new exploration of the enigma of the soul and body. Keen observation, fluidity, and a solid understanding of anatomy are the foundations of his work.

Guido attended the New York Academy of Arts to study Human Figure with Mark Tennant, and was twice awarded a scholarship to study with Antonio López García in Spain. In 2019 he was assigned an Odd Nerdrum scholarship for the year 2020.

“Art is a vital part of humanity and we become in touch with it when we are born,” Guido says. “Everyone has picked up a piece of crayon from the ground as a child and marked a sheet of paper with it. It’s not just something we make, it’s us.” 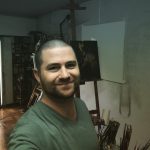 Guido’s parents and brothers were a great influence on him. His mother is also a painter, although she works as a psychologist. Because of his mother’s love of art, Guido was in touch with the painting atmosphere, its craft, and materials since he was a child.

When he grew up he became influenced by Antonio Lopez García and Spanish contemporary realism. Spanish painting in general influences his aesthetic: Goya, Sorolla, Fortuny, and also some great American painterly realism, mainly represented by Sargent, Richard Schmid, and so on.

A sword at the heart of the earth

“Painting aims for beauty, whether the person in front of the canvas holding a brush is Francis Bacon or Ilya Repin,” Guido says. “Its power lies in imagery, not in words or narrative. It’s about color and matter. I think that one of the things that painting can achieve (when we give all our attention to it), is to connect us to a primordial beginning, to the dawn of humanity. It’s a savage yet tender way to stick a sword at the heart of the earth.”