Gregg paints with linseed oil, which has the propensity to grow more transparent with age and traces of earlier painted marks gradually appear — called pentimenti. 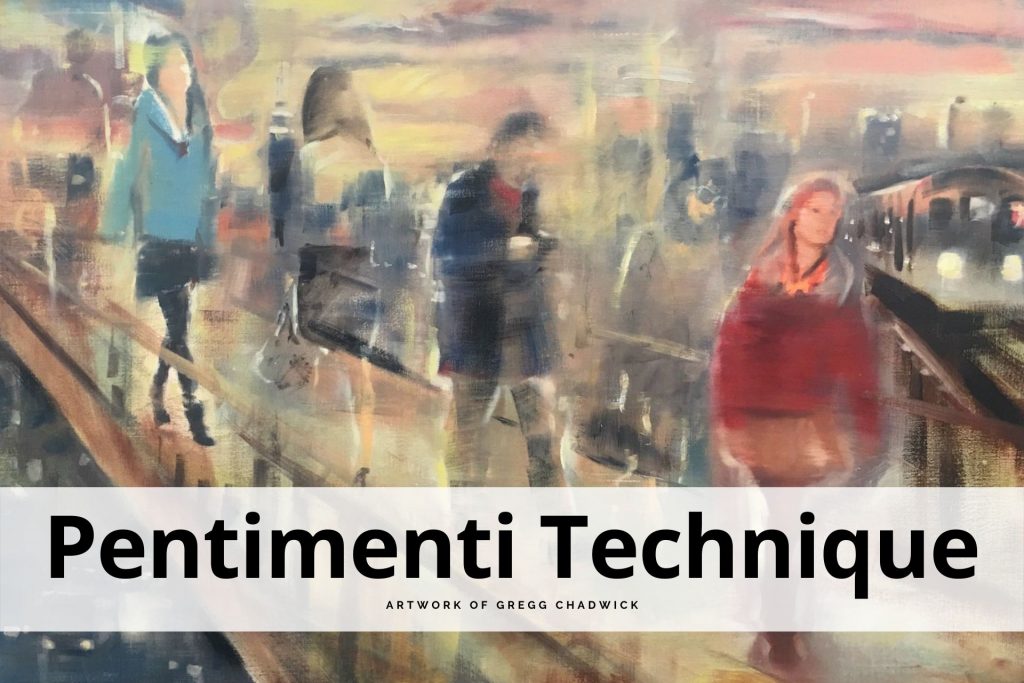 Gregg Chadwick creates his artwork in an old airplane hangar in Santa Monica, California. The recurring sound of airplane take-offs and landings from the active airport runway outside his studio reminds him of his own history of travel.

Chadwick actively exhibits his artworks in galleries, art fairs, and museums nationally and internationally. His art is included in the notable collections of the Adobe Corporation, the Gilpin Museum, the Graciela Hotel Burbank, the Harbor Court Hotel – San Francisco, the Kimpton Group’s headquarters in San Francisco, the National Museum of the Marine Corps, Nordstrom Company Headquarters, the W Hotel Hollywood, and Winona State University. 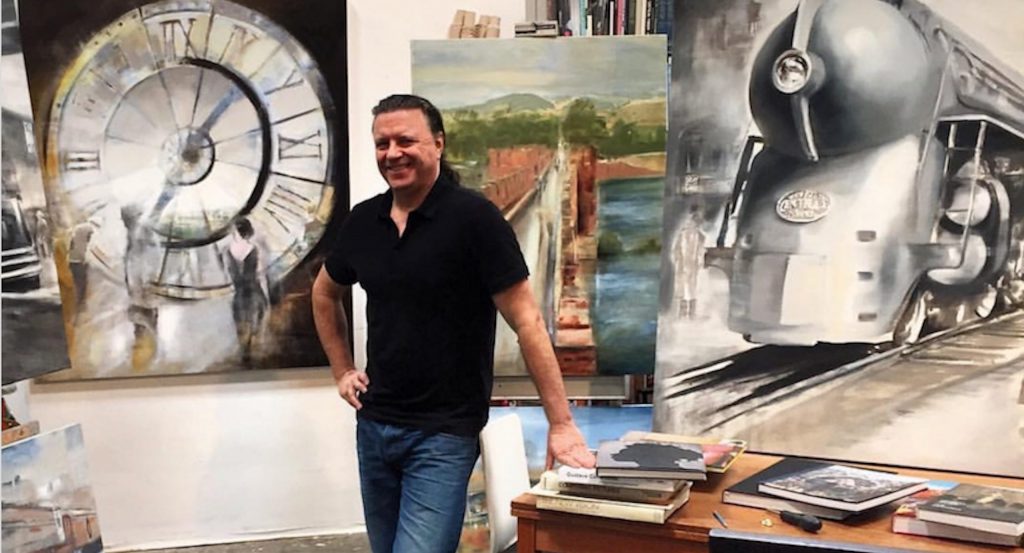 Intrigued by the secrets of oil painting

I learned that painting was akin to alchemy as I strove to enact the illusive transference of pigments in oil into images of light and mystery.

“When I was young, my family moved often,” Chadwick recalls. “Each new town or city brought challenges, but also fresh experiences, new friends, and inspiring museums to visit.”

The Metropolitan Museum of Art in New York and the National Gallery in Washington DC were two of Gregg’s early favorites. He would spend hours looking at art from all periods.

“I remember gazing at Hans Holbein’s painting Edward VI as a Child in the National Gallery and marveling at the craftsmanship,” Chadwick says. “How did he do it? It seemed so real. So alive. I needed to learn the secrets of oil painting. It seemed like magic to me. Later I learned that painting was akin to alchemy as I strove to enact the illusive transference of pigments in oil into images of light and mystery.”

Learning to make his own paint

As a High School student, Chadwick began taking classes at the Corcoran School of Art in Washington DC. The classes were held in a grand 19th-century skylit studio. Students drew from the model. They learned to make their own paint from ground pigments and egg tempera. And they often took class trips to the exhibitions in the Corcoran Museum of Art next door.

“Time seemed to stand still when I was drawing or painting,” Chadwick says. “The touch of the brush onto canvas seemed to become part of me.”

The best advice an artist ever gave Chadwick came from the painter RB Kitaj at a lecture at UCLA’s Hammer Museum in Los Angeles. “Paint your worlds,” Kitaj said that day, just months before his death.

Kitaj saw a card gripped in Chadwick’s hand of his painting, A Walk with Ganesh, and he started a brief conversation saying, “Is that for me? I would like to have that.” Chadwick handed him the card and watched him examine the image of the painting in his hands, and then Chadwick’s face as they talked.

Moved by their discussion, Chadwick went home and painted Kitaj as he appeared that evening; white beard, roaring voice, stern focus, like a prophet calling figurative artists, in particular, to “paint your worlds.”

“Ghosts of earlier ideas appear within my artworks and combine with other transparent moments to create a semblance of movement, of time passing,” Chadwick says. “I build a combination of shadow and illumination in each painting to create a sensation of light emanating from the work.

“I work with oil paint and usually create at least one color in each painting from ground pigments mixed by hand with linseed oil. Linseed oil has the propensity to grow more transparent with age and visible traces of earlier painted marks gradually appear because of this tendency — called pentimenti. I embrace this eventual outcome in my work and incorporate planned and unplanned pentimenti in my process.”

The rails of America, Earth Day, Buddism, and more

The first series was inspired by the 50th anniversary of Earth Day and sheds light on climate change, the beauty of the natural world, and our place with other species.

Gregg Chadwick paints scenes from the life of Asia that reminds us of the monastic life of pilgrimage which has been all but lost in the West.

– Ratnagarbha and Thomas Jones, Urthona: Journal of Buddhism and the Arts, Issue 20
In his second series, his paintings are crafted as reflecting devices that mirror and focus the viewer’s attention on where we are in this tumultuous time. “Art at its best possesses an uncanny ability to communicate ideas and feelings that we need to understand,” he says. “It seems that especially in times of struggle or unrest, art helps us connect to the personhood of others. Art creates dialogue. Dialogue promotes reflective discussion. And reflection can lead to change.”

His third series of paintings is an ongoing pursuit. For 20 years, he has painted artworks inspired by the aspirational nature of Buddhism.

His fourth series of paintings is deeply rooted in my family’s history. “I grew up with the rails of America in my blood,” Chadwick says. “My grandfather Arthur Desch, worked as a fireman stoking coal in steam engines before he advanced to train engineer on the Jersey Central Line. Parties and family gatherings in my grandparent’s home brought the rhythms of the rails home. In their clean but Jersey dank basement, the sounds of railroad workers echoed in the music my aunts and cousins played in the shadows of the train lines outside.”

From Junior Parker to Elvis Presley to Bob Dylan to Johnny Cash to The Band to Bruce Springsteen to Michael McDermott to arts writer Greil Marcus to film writer and director Jim Jarmusch, the enduring mythos of America and its legacy has been wrapped in the blues notes of the song Mystery Train. “Recently, while flipping through my mom’s carefully tended scrapbook, I found black and white memories of my family’s yearnings, struggles, and triumphs,” Chadwick says. “Whispers of cellar mysteries found their way back into my thoughts and dreams. This series of paintings is steeped in these powerful echoes of those machine days.”

Chadwick is frequently invited to lecture on the arts. Twice a year, he delivers a key lecture on art and social justice at UCLA in an interdisciplinary forum with the UCLA School of Nursing. He has also spoken at Monterey Peninsula College, the Esalen Institute, and at the World Views forum in Amsterdam. In Winter 2020, he was a working artist in residence at the Center Theatre Group in Los Angeles leading students at Culver City High School in an exploration of Dael Orlandersmith’s “Until the Flood.”

He is also the proud father of his transgender daughter Cassiel.