Want an in-your-face painting or print? BEWARE. These up-and-coming pop surrealism artists are not for the faint of heart! 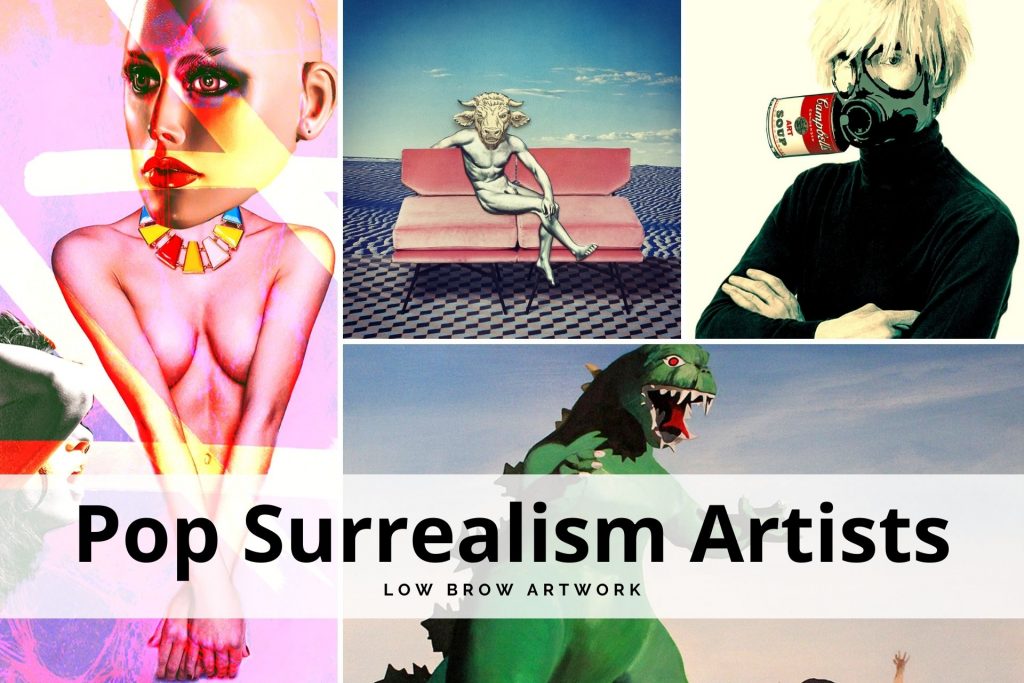 There’s a particular freshness and artistic freedom present among pop surrealism artists. The raw artistry, the unrefined confidence, and the disregard for the conventional contribute to the striking colorful imagery they produce.

Pop surrealism is a type of lowbrow art that was introduced in the late 1970s by underground iconic cartoonists that were considered outlaws by critics at the time. This style of art bridges the gap between surrealism and pop culture, taking the best from both worlds to create satirical works submerged in fantasy. If you seek a statement piece that would make June Cleaver gulp, you’re in the right place!

Check out the pop surrealism artists below and see what you think.

Carl Moore is a fine art graduate from the Winchester school of art. After graduating, Carl found fine arts unwelcoming and restraining before finding comfort within the confines of the Pop surrealists movement. He stumbled upon the Juxtapoz magazine, created in 1994 by Robert Williams. Here, he became inspired by the works of Travis Louie, Ray Caesar, Todd Schorr among others, to create more relatable and light-hearted art. His art displays animals pretending to be other animals, where each animal uses found objects and a splash or two of paint to recreate themselves into the animal they always wanted to be.

Ken Vrana started painting at the age of 7 and has never looked back since. This 74-year-old artist had the rare opportunity of studying with other legendary pop artists and art icons like Andy Warhol, Larry Rivers and William DeKooning. His art varies from subject to subject, though he prefers to be associated with pop-surrealism artists. Aside from painting, he also builds robots from discarded scrap metal, then donates the profits he earns selling them to fight cancer.

Tony Leone is a graphic designer who believes the boundary between his works and fine art is very thin. He says defining his style is quite difficult since he never follows a specific direction, but rather creates whatever resonates with him. His passion for cinematography, photography and art in general often reflects on his works. Tony’s art is also often influenced by current events or cultural trends. “Heaven 1.9,” for example, became the cover of a book published by Helikon, which contains tales from the pandemic by various Hungarian writers.

Michael Kaza describes his art as a bridge to the unconscious that transcends colors and lines, touching that which reveals our real selves. Furthermore, he describes this touch as a practice, magic or an action he prefers to call detoxart performance. His works explore the human psyche, plunging into taboo, grotesque, provocative and humorous topics. He believes pop surrealism isn’t just a game with images but rather a penetration into the essence of the modern man’s unconsciousness.

New Jersey-born pop surrealism artist, Mike Ferrari, describes his art as reviving elements of the past to create a new pulp fiction. Here, memory is fabricated through rendered or cut-and-pasted historical photographs, color, surrealism, and illustration. The subjects pictured in his works are ones who embody both beauty and despair.

Fabienne Jenny Jacquet is one of many pop surrealism artists who allows their fascination with music, film and literature to harmonise with their experiences and memories, for the creation of visual art. Her paintings contain quick strokes and rapid sketches, which gives them a spontaneous, chaotic but organic feel. Fabienne ascribes this style of hers to her desire to walk that tightrope where the work is always one step from either coming together or collapsing into nothingness. She focuses on building loose outlines to get the feel of a person, rather than achieving a real likeness. It is about representing what goes on under the skin, as opposed to the outward appearance.

Carlo Trevisan describes his art as oneiric and dreamy. He views life from the perception of a child: colorful, bright, with a dash of impossible possibilities. Trevisan’s art is both easy and mysterious with elements of peace and serenity.

Haufi Ficoure has been intrigued by the use of powerful aesthetics to tell what cannot be told with words, but with colors, shapes, and textures only. Most of his work revolves around the representation of the human body, primal instincts, and dark desires.

Nathan Paddison‘s art is motivated by his love for animals. Nathan’s strong lines and approach to palette meld closely with the physicality and urgency in which he works.

Carol Muthiga Oyekunle is a Kenyan-American artist and accessories designer. Carol’s creative process stems from her desire to present her ideas in ways that would stay relevant to the world. Her art represents women as symbolic ethereal warriors. In most of her art, she adorns iconic women with bold, colorful botanical motifs that present the illusion of divine and mythical creatures.

Vakseen is an American artist based in Los Angeles. His “Vanity Pop” painting series displays and celebrates women in all of their glory, including their imperfections and endless perfections. Although Vakseen couldn’t fathom being a woman in such a patriarchal world, he uses his creativity to celebrate the innate beauty and unique qualities of women.

Yulia Poliakova is a graphic designer by education. She took up painting in 2009, cooperated with the car showroom Bentley Ukraine, the ART gallery B&S. She took first place in the Week of Ukrainian art in the same year, presented her first solo exhibition, which was called “The Identification of Eve”. Yulia creates beautiful collages by combining graphic design and painting. She is mostly motivated by creating captivating stories in her paintings that compels people to relate them to their personal experiences.

Dejan Zivkovic is a visual artist who treats paradoxical phenomena of the modern age with irony, absurdity, and a grotesque touch. He often merges digital iconography with classical or contemporary subjects using pop surrealism. His artistic motivation is to reveal reality in a different light, unearthing hidden roles behind a pleasant exterior.

Javier Lopez is a sculptor from Bogota, Columbia. Being born in the eighties made it possible for him to experience animated series about robots like Astroboy, Mazinger, and Silverhawks. Also, he indulged in several aliens and robots-related movies which created the foundation for which his art exists. He often muses about the possibility of artificial intelligence evolving alongside humans, believing that future technology will set the pace for the creation of a new species.

Michael Manalo was born in 1986, in Manila, Philippines. Securing a degree in nursing played a huge factor in helping him to discover his unique artistry. His experience as a student of Nursing made him interested in the dynamics behind complex and contrasting emotions. Examples of such emotions are feeling happy in a state of sadness, melancholy in a euphoric state, etc. He creates composites by manipulating photographs to suit his imagination and conflicting expressions.

Paul Kingsley grew up in the 70s at a time when art and music found a perfect union in popular culture through album covers, poster art, and illustrations. He performed in bands from the age of 12 right into his mid-twenties when his fascination caught the emerging digital technologies of Photoshop and its likes. His relationship with the digital pen & tablet started around 2016, which led to the  “Metamorphica & Danse Macabre” series of works. The initial idea for this series came as a result of his interest in mythology and symbolism. His fantasies cover the possibility of mythical figures being adorned with contemporary fashion, for instance, “a punk rock leopard”.

One aspect I love about emerging art is its ability to surprise and evoke new ideas. These wonderful artists take pop culture trends we’re all used to and give them a unique spin. What a bizarre, fantastical world we live in. Why have a painting of a boring Kinkade cottage hanging on your wall when you can have a painting of nuns running from Godzilla? That’s the real question to consider.

Here are all 16 pop surrealism artists we covered in this article: