Sculptures made with steel, wire, and iron mesh, which enhance the feeling of discontinuity of matter (solids and voids), usually colored in orange or blue. 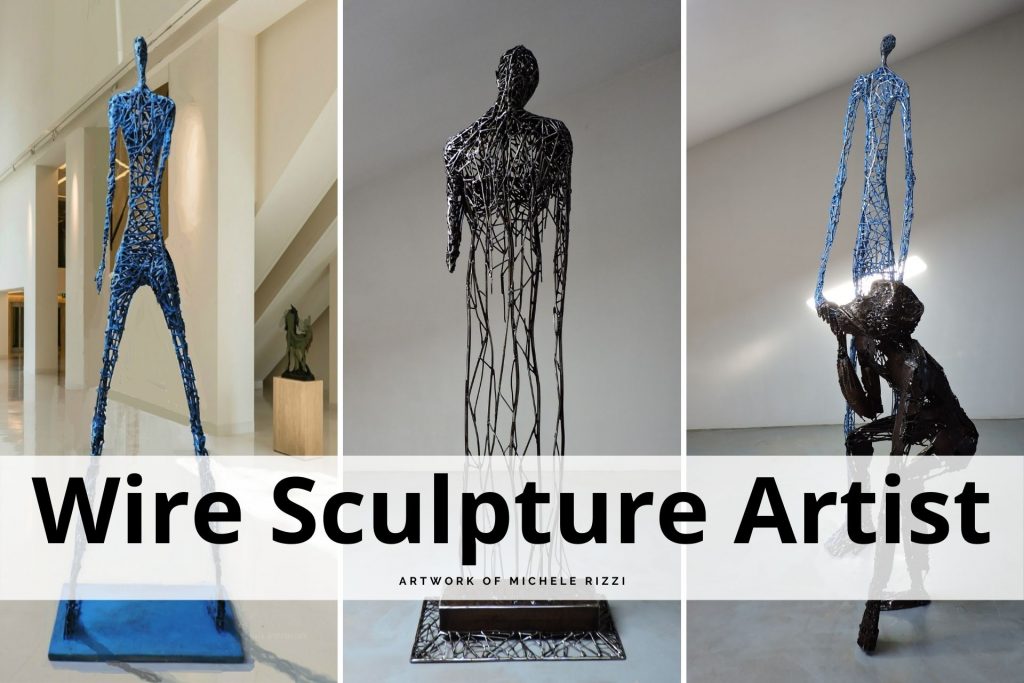 Wire sculpture artist Michele Rizzi was born in Turin, Italy in 1971 (he currently lives and works in Pianezza) is best known for sculptures “Condensation and dispersion of matter.”

Rizzi’s work focuses on archetypal human figures of suffering. His influences range from ancient Minoan art to African art (athletic and thin figures) to sculptures of the last century by A. Giacometti to Manga Japanese art to the modern AI-inspired pseudo aliens or humans of the future.

A family of immigrant workers 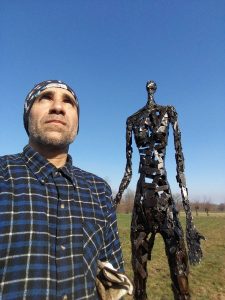 “I grew up in a family of immigrant workers from southern Italy,” Rizzi says. “I had some difficulties in kindergarten (perhaps some kind of dyslexia), but an innate ability to draw and paint.” Rizzi had the fortune of attending countless ballets, theatrical performances, and exhibitions that left their mark.

As a boy, Michele attended a technical school and then the Faculty of Architecture.

“But the most important thing, I think, was my father’s stacks of waste and recovery materials from his second job,” Rizzi says. Michele was able to use diverse tools and utensils from an early age. “Another fundamental thing was to live free and wild in nature,” he says. “The Faculty of architecture gave me the opportunity to enrich and refine the approach to the realization of my ideas. I may have traveled a tortuous path to become an artist but this has allowed me to arrive with a wealth of multidisciplinary knowledge.”

Michele loves literature and cinema. He is fond of the fantasy genre, in particular of the films of Christopher Nolan.

I like works that have a theme and an aesthetic that goes beyond the present and expands in a double direction past and future.

“Like him, I’m obsessed with the relationship between time and space,” Michele says. “I like works that have a theme and an aesthetic that goes beyond the present and expands in a double direction past and future. I like works that are linked to the whole human race and from any era. Works that try to be universal, powerful, material and poetic.”

According to Michele, great art goes beyond time and also speaks to an imaginary interlocutor in 100, 500, or 1000 years, just as a Greek sculpture tends to transcend time. “In fact, many of my works are born imagining them as archaeological finds from the future,” he says. “They must embody an archaic and futuristic value at the same time.”